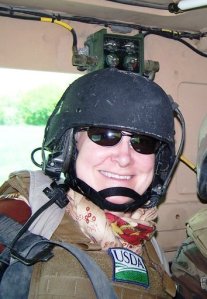 The truth is no one ever believes for a minute–no matter what danger you’re in–that you yourself are going to be killed. The bomb is always going to hit the other person. – Agatha Christie

Every Wednesday I am going to include an excerpt from my memoir “Small Gifts From the Heart”. Hope you enjoy.

The first time I am in a rocket attack, it was about 8:00 PM. I am in my bunk at Forward Operating Base Morales Frazier absorbed in a murder mystery. The women soldiers in the tent are chatting, reading and getting ready for bed. The sound of outgoing mortar rounds has a deep, bass boom. After a while, I don’t even notice them any more. It is like an ambient sound machine that lulls me to sleep at night. This night I hear a high, whistling sound racing through the night sky above our tent. Although I have never heard it, I know instantly it is incoming. We all freeze, some with their mouths open, silenced in mid-sentence by the screaming of the rocket, waiting to see where it will land.

BOOM! It doesn’t hit our tent. Then, as one, chatter breaks out. A soldier asks me, “What’ll we do? What’ll we do?”

The Captain gets on her phone and talks to the Tactical Operations Center (TOC). They tell us to get in our body armor and go to the French bunker. Now the bunker is over on the other side of the base. I have already put on my old flannel pajamas and gone to bed. In our pre-deployment training they told us the biggest danger in a rocket attack, other than a direct hit, is getting hit by flying shrapnel. I elect to stay in my bunk. My only concession is to put aside the murder mystery and read the Bible. I think about putting on my armor, but I have already washed my feet, the last thing I do before getting in my bunk because the floor is dusty, and my armor is across the room. I decide to take my chances. The others head out to the bunker.

After a few minutes another rocket comes squealing over. BOOM!! This one lands outside the fence.I read the 23rd Psalm with renewed vigor. That little frisson of fear that comes with being in the line of fire is skipping across my nerves. I am alone in the tent and I feel very far from home. What I wouldn’t give to be in my cozy Maine home with my family right now.

The one good thing about the Taliban rockets is that they are mostly surplus that the Russians left behind when they withdrew from Afghanistan. They are old and often duds. Forty-five minutes after the initial rocket screamed over our tent the French return outgoing mortars and it is very likely the insurgents are already gone. They send off volley after volley of rockets which seem to say, “Our rockets are bigger than your rockets.” It is an emotional balm to help sooth our jangled nerves. Many of the soldiers are outside watching the rockets streak their yellow light towards the mountain towering over the base, cheering as each round blasts a hole in the bare, gray shale mountainside. It is like a Fourth of July celebration and makes everyone feel better.

As the deep bass “Whoof!” of the last outgoing rocket reverberates off into the distance, my tentmates troop excitedly back inside. We are all so glad that those two rockets didn’t have anyone’s name stamped on them. One Air Force nurse shares that when the first rocket came over; she was on the phone with her Dad, a Vietnam veteran. He could hear the whine of the rockets over the phone and had told her it was incoming. She now calls him back to let him know she is okay. Pent-up nervousness and adrenaline causes many of the women to laugh nervously. The Captain asks me if I am okay and I tell her I am fine. I have switched back to my murder mystery in an effort to release my fear. Murder mysteries always relax me.

“She’s not in the military and she is calmer than any of us!” she says to the others.

I just smile serenely, reinforcing this perception. What they don’t know is that I was probably more scared than any of them, but I am determined not to be seen as someone who panics at the first little rocket attack. I do have my pride.

When I transferred to the Embassy, I was in several rocket attacks. One time another civilian and I are having coffee outside the dining hall with two newly arrived civilians waiting to go to the field. We hear some booms in the distance. “Outgoing,” we knowingly say and go back to chatting, unconcerned. The newbies look nervously at each other. They’ll learn all too soon that you can get used to anything in Afghanistan. If awakened in the night by a rocket explosion, I turn my head to the side so I can hear better. If I don’t hear people screaming or a duck and cover siren, I go peacefully back to sleep. After all this is what I signed up for. I can’t afford to give in to fear and still be able to do my job.

It is only after I return to the peace and safety of home that the sound of fireworks and loud noises reduces me to a quivering mass of fear. The coping mechanisms I developed in Afghanistan don’t seem to work at home. Loud noises shouldn’t scare me anymore but the fear they bring is so much worse than anything I felt in Afghanistan. The horror of post traumatic stress is that normalcy has become the monster that lies in wait for me and it is a monster no amount of body armor can protect me from.