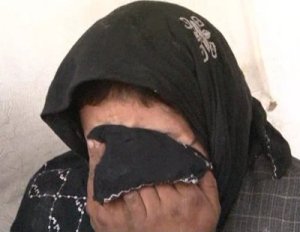 Let us touch the dying, the poor, the lonely and the unwanted according to the graces we have received and let us not be ashamed or slow to do the humble work. – Mother Teresa

This is another excerpt from my memoir “Small Gifts from the Heart”.

As I make my way to meet a visitor at the front gate of forward operating base Morales Frazier in Kapisa Province, I notice an Afghan woman, dressed in black, sitting on the gravel and waiting with other villagers to see the French doctors on the base. Her eyes are closed and her face is etched with lines of pain as she adjusts her headscarf to shield herself from the scorching sun. On my way back I notice she is lying face down in the large, gray gravel, her face cradled in her hands. I ask my interpreter, Ibrahim, “Does she need help?”

Several young men are sitting on a bench in the shade, and he asks them about her. They dismissively say she has a head injury and a headache, I reach down and touch her shoulder. Squinting from the bright sun, she looks up at me and I put my arms around her and help her to stand. I notice that she is very weak and feeble. I motion for the young men to move over so that she can sit on the bench and ask the guards at the gate if they have any water for the people waiting. “Is she going to be seen soon?” I inquire.

They inform me that there are a lot of serious injuries today, including some children that the Taliban pulled from their homes, breaking their arms and legs as a warning to the parents, threatening to return and kill them if there is any cooperation with the Americans. I look down at a little boy who looks to be about 5, standing there with his broken arm in a red bandana sling, staring at me with his big brown eyes full of fear – because I am an American. I still have nightmares about those eyes.

“Let me see what I can find out,” I tell Ibrahim. I race to find our American medic to see if there is anything he can do. He tells me, “I can’t treat her, but let me see if I can free someone up at the clinic.” The French doctor tells us she knows the woman.

“She has a terminal brain tumor that has spread to her lungs. She is dying.” Anguished, I tell her the woman is very sick and weak and needs immediate attention. She tells me she will send a medic down to get her. On my way out I notice a young girl with a broken leg that is held together by a rod and screws inserted into her leg.. I look around at the people waiting to be seen and I am overwhelmed at the misery and sickness before me.

I hurry back to the gate and sit down next to the woman. “They are coming for her,” I tell Ibrahim, and he translates that message to her. She has the most startling blue eyes I have ever seen – the color of palest turquoise – and when she hears they are coming for her they fill with tears.

“I have been coming every day for a week, but no one cares,” she whispers. She leans weakly against my arm, and I ask her if she wants to lay her head down in my lap while she waits. As I hold her in my arms, I stroke her back and feel the thinness of her body; her bones are knobs and sticks bumping under my hand. I hear the raspiness of each labored breath as she struggles to breathe with lungs ravaged by cancer’s insidious fingers. She raises her withered hand to lift the scarf off her head, revealing a tumor so large that it has burst through her scalp. An open wound reaches from the crown of her head down to her neck where the tumor has split the skin. I can smell the stench of infection, and although the site and smell of the festering red wound edged with yellow flesh makes my stomach clinch, I am moved with pity. I cannot imagine her pain.

She says something to Ibrahim that so overcomes him, he is unable to speak. As he fights back tears, stomping his foot on the ground, he is visibly shaken. He finally looks at me with stricken eyes and says she has told him, “Now, if I just had someone who could feed me.” My eyes fill with tears and I angrily say, “This isn’t right.” A man in the crowd silently hands me a box of cookies, and I open them for her. Crumbs spill from the sides of her mouth as she shoves them in with a hunger that cannot be assuaged by such a meager ration. I have seen hungry people but never anyone starving, and the sight wounds me like a hot knife plunged into my core.

When the medics come, Ibrahim gently lifts the sick woman into the vehicle. We walk to the clinic to help her out and get her inside. As I start to walk away she stops me with a touch on my arm and holds me with her amazing eyes. A look passes between us that transcends spoken language. Though we will never meet again a bond has formed, and neither will forget the other. She touches her hand to her mouth in a gesture of farewell, and I turn and walk away.

The next day I go back to the clinic and ask the doctor if there is any place like a hospice for the woman to go, offering to pay for her care. She tells me that there is no such place, adding that because she is a widow with no family, there is no one to care for her. The reality is that the needs of families in the poor village are so great that compassion for others is a luxury that cannot be afforded. The doctor tells me that the woman does not have long to live, as if this will make me feel better. At that point I begin to pray that death will soon bring her freedom from her pain.

There are thousands more like this woman suffering through hunger and pain in Afghanistan. While the idea of the terminally ill dying alone is abhorrent to most of us, this is a modern aberration. For most of mankind’s existence this has been the norm. Much of Afghanistan is living in another century where poverty and sickness make obtaining day-to-day subsistence a grueling task at best. This is their life and they accept it. It is all they know.

Many times in my two years in Afghanistan I wonder if any of us, military or civilian, are doing anything that matters. Then I think of this nameless woman and I know that any time or money we spend in Afghanistan that makes food, health care and education available is well spent. While America has struggled with our longest war in terms of loss of life and treasure, for me it is ultimately about humanity. I will never forget the woman with the turquoise eyes. I only knew her for an hour, but she changed my life forever.

5 thoughts on “The Woman With the Turquoise Eyes”