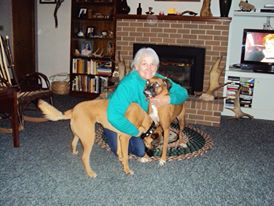 Until one has loved an animal, a part of one’s soul remains unawakened. – Anatole France

The other night I was comforting my sobbing daughter as she was facing the possibility of having to put her beloved cat to sleep. My heart was breaking for her because I know the pain and guilt that comes from having to make that decision. When I worked as a veterinary technician we euthanized pets every day. It was humbling to see how everyone in the office treated each pet with such love and respect. I would sing to them as we prepared them for their eternal sleep. It was particularly hard to see the grief of the families. Without exception they all had a sense of guilt that they were “killing” their loved one. I told them that we love our pets and give them a good life and we have to love them enough to let them go when they are suffering.

Scout, the comedian of the family. Rescued from a meth addict.

So many people have come into my life during my 60+ years and I have to admit I don’t remember most of them but I can honestly say I remember every pet I have ever had. My very first memory is of playing with our family dog, Minksy. One of her puppies, Penny Louise, was my companion from the time I was born until I turned 16. Each cat, dog, hamster, rat, etc. that I have been blessed to share my life with has left indelible footprints on my heart. To no one else in your life can you go and get such unconditional love and acceptance.

They say an apple a day keeps the doctor away but how about a pet? A number of studies have shown that having a pet in the home helps ward off allergies for young children. The Centers for Disease Control Prevention and the National Health Institute both conclude that people who have pets exhibit decreased blood pressure, cholesterol and triglyceride levels and people who have had heart attacks have better recovery rates. Pets are better than antidepressants in some ways. They not only give us unconditional love but they give us a sense of purpose and combat loneliness, particularly among the sick and elderly. They help bring out feelings of love, give us companionship and make us laugh with their antics.

Animals provide support as service dogs for people with physical limitations and emotional traumas that make it difficult to function in social situations. Veterans and others traumatized by war can use service dogs to facilitate the difficult transition from the battlefield to the “normal” world. The dogs can draw out the most isolated personality and helps to assuage the emotional numbness and hypervigilance that are common with Post Traumatic Stress Disorder (PTSD).

GG (Good Girl) is the watchdog and protector of the family. I brought her back from Afghanistan.

Animals have been used to assist the military throughout history. Dogs, horses, mules, camels and even elephants have been used for protection and transportation; as late as the Afghanistan war when the first Special Operations Forces rode horses through difficult terrain on dangerous secret missions. Some unconventional animals have been used as well to support troops. Sea lions have been trained by the Navy to find swimmers near piers and ships or objects that were considered suspicious or a threat. Dolphins are trained to sense mines in water and alert their handlers. Cats are present on many bases around the world to reduce disease-spreading rodents and poisonous snakes. When I was in Afghanistan the commander on our base ordered all the cats to be killed. Two weeks later a poisonous snake was found outside my tent. At ISAF, the facility that houses the international forces in Kabul, cats patrol the base and are kept healthy by military veterinarians. On the adjoining U.S. Embassy campus, cats have their own territories and provide a much needed touch of normalcy to a stressful working environment.

Blu, the baby of the family. We rescued her from an abusive situation.

During WWI and WWII, the U.S. military enlisted more than 200,000 pigeons to help relay messages. One pigeon, Cher Ami flew 12 important missions before being struck by enemy fire, although he was shot in the breast and leg he was able to deliver his message, which was found dangling from his battered leg. Because of his efforts 194 soldiers were rescued. He was awarded the French Croix de Guerre for heroic service. Sgt. Stubby, a pit bull stray smuggled by soldiers overseas, was the most decorated war dog of WWI and the only dog to be promoted to sergeant through combat. He served in the trenches in France for 18 months and participated in four offensives and 17 battles. Rats are now being used to detect and report land mines in Afghanistan because their weight doesn’t set off the explosive device. While at the Embassy in Kabul bomb sniffing dogs protected me every day.

Busta, the matriarch of the family at 16 years of age. She’s a grumpy kitty but we love her.

Thomas who was rescued from a shelter is my sleeping buddy.

From war heroes to family pets, animals have had a longstanding communion with humans. We give them food, water, shelter, medical care and they give us love, companionship and acceptance. It is not surprising that we develop bonds that even death cannot break. Capitan, an Argentinian dog ran away from home after his master died and even though he had never been taken to the cemetery he was discovered laying on his master’s grave and he remained there for six years until his death, cared for by the cemetery staff. So it is no surprise that I can remember every pet I’ve ever had. They didn’t die; they just went to sleep in my heart.