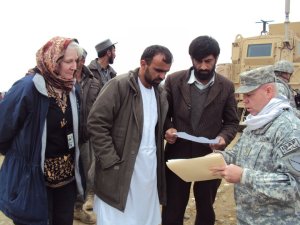 We must then build a proper relationship between the richest and the poorest countries based on our desire that they are able to fend for themselves with the investment that is necessary in their agriculture. – Gordon Brown, former Prime Minister of the UK

During my training in preparation to deploy to Afghanistan as an agricultural adviser I learned that Afghan women have a very different place in society than western women. I am told there are three sexes in Afghanistan – Afghan and western men, Afghan women and western women. I wonder if I will be accepted by Afghan farmers, either as an American or as a woman. I receive a lot of advice on how to dress and act, but I make the decision early on to rely mainly on just being myself and letting my agricultural expertise speak for itself. I have worked in agriculture, a male dominated arena, for over 30 years. This won’t be the first time I’ve had to prove I know what I am doing.

Soon after arriving at my post I go on a mission to the compound of the Director of Agriculture, Irrigation and Livestock (DAIL) in Kapisa Province with a group of American National Guardsmen to deliver agricultural seeds.  As I begin to mark off the variety and amount of seed, I notice the Afghan farmers unloading the truck are either politely ignoring me or casting quick sidelong glances at me. I know I look strange to them and I am not offended by their curiosity. The men show the signs of a lifetime of hard work. Although they look like they are in their 50’s and 60’s, most likely they are in their 30’s or 40’s. Life is hard here and people age quickly, with the average lifespan being 44. Their hands are calloused, many with injured nails that look more like the yellowed talons of some huge predatory bird. Their nut-brown faces are lined from long hours in the unrelenting Afghan sun, made more searing because of the high altitude.  Many are gap-toothed and their teeth are stained from tobacco use. To me their faces are made beautiful by the honesty of the hard work they must do to feed their families. I come from an agricultural background devoid of massive tractors and combines and I instantly feel a bond with these tillers of the soil. They are wearing dingy white salwar kameze, loose pants with a long tunic, many topped off with western-style sports jackets and vests.   They are wearing headscarves or intricately wound turbans. The smell of stale sweat wafts over me in the gentle breeze that is tickling the leaves of the acacia trees under which we are seeking some shade.

Some of the bags in the truck have split in transit and the seeds have spilled out onto the bed of the truck. The men rake up the seeds with their hands, careful to capture each precious seed. Some of the seeds are bright pick, having been treated with fungicide.

“What kind of seed are these?” they ask in amazement.

My interpreter, Najib, is not an agriculture person and he lifts his shoulders in a gesture that says, “Beat’s me.”  I lean over and say they are sorghum seeds. “Sorghum!” they say and nod their heads.  Having broken the ice, they start to bring me other seeds, holding them out for me to see, waiting shyly for my reply. I identify barley, oats and wheat. They are becoming friendlier and start making eye contact with me.  They bring me a handful of turnip seeds. Najib doesn’t know the Dari word for turnip, so I draw the men a picture of a turnip and they smile with pure delight.

As we get ready to leave, one of the turbaned farmers reaches into his pocket with his work-soiled and hardened hand, takes my hand and gently puts something onto my palm. I look down and see he has given me some dried mulberries and walnuts. I look up and smile, and he smiles back. Although the mix looks less than clean, I eat it with joy in my heart because he has offered me his food. He is letting me know with this offering that he accepts me.

It is a great day.