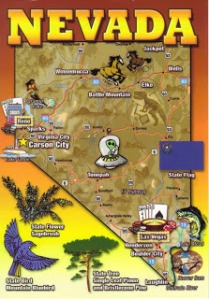 I thought it might be fun to set my books in Nevada, which is in the West and still pretty wild. You can still gamble, carry a loaded pistol, and go into a silver mine, and they still have saloons with swinging doors, boardwalks, and horses. – Carol Lawrence

Nevada usually brings to mind the bright lights and thrills of Las Vegas where millions go to try their hand at the casinos and see spectacular entertainment. It is guaranteed you’ll leave either overexcited from nonstop stimulation or depressed if your luck ran out at the roulette wheel – but whatever happens at Vegas, stays in Vegas.

I lived in Nevada less than a year but I developed a real love for this barren, lush, bright, quiet, noisy land. Unfortunately I was severely allergic to something there and was sick from day one. I believe it was juniper, but whatever it was, the allergy became life-threatening and I had to leave my job as Field Manager for the Tuscarora Field Office with the Bureau of Land Management (BLM). It was a wonderful job that allowed me the opportunity to manage over 3.1 million acres of public land with a base in Elko. In the short time I was there I oversaw programs in mining, ranching, wild horses, biology and so much more. I had an exemplary staff with the obligatory one or two problem employees thrown in to make life interesting. In one memorable day I flew over the Carlin Trend, a five-mile wide, 40-mile long geologic feature that is rich in mineral deposits, including gold, in a small aircraft and later that day I went 2000 ft. underground at one of the local gold mines. It was a day I will never forget and it left me with a deep respect for miners.

Nevada is largely desert and semiarid, broken up by many north-south mountain ranges and boasts world class recreation areas such as Red Rock Canyon National Conservation Area, Valley of Fire State Park, Great Basin National Park, Humboldt National Forest, Lake Mead National Recreation Area and Death Valley National Park. There are 68 designated wilderness areas protecting almost 7 million acres. Over 86% of the land in Nevada is managed by The U.S. Federal government, both civilian and military. The infamous Area 51 where supposedly alien remains and a crashed space vehicle are stored lies in remote southern Nevada. The base’s primary mission is unknown but it is most likely an area that supports the development and testing of experimental aircraft and weapons systems. The stealth bomber was tested there and I can imagine anyone seeing this black triangular aircraft could well imagine it to be a UFO.

The Nevada Test site, 65 miles NW of Las Vegas, was the site for the first nuclear bomb tests. I worked with a woman who was a small child when the first test was conducted and she recalls the mushroom cloud was visible from her school and the teachers took the kids outside to watch.  Many of her classmates died prematurely with cancer and other illness over the years and she has to go every year for medical testing. The field trip from hell.

And then, there are the legal brothels in Nevada. I did a work detail in Ely and I was so tempted to go visit the local “house”, purely for curiosity purposes. I wanted to see what they wore; probably not as exotic as I imagine. I decided against it, not wanting to see the headline, “Federal Employee Caught Entering Brothel – Just to Look around – She Says”. For a Christmas party, my field office rented a locomotive train that runs from Ely to the Ruth Mine and returns. When the train passes by the brothel the ladies come out and signal the train with hand-held lanterns swinging back and forth. An advertisement in the trains read, “Nevada’s Brothels – servicing the Old West since the 1800’s.”

What I will remember the most about Nevada is the overwhelming beauty. We used to take a Sunday drive on the 12-mile Lamoille Canyon Road, a National Forest Scenic Byway, where it was common to see white mountain goats defying gravity as they leapt from one narrow ledge to another.  Hiking in Red Rock Canyon and seeing the formations etched by wind, water, and time was awe inspiring. I also remember the warm, wonderful people who I met there who made me feel so at home and supported me through my illness. I was sad to leave. I needed more time to wander the roads of this amazing land and see the mountains, rivers, deserts, forests and possibly aliens.

3 thoughts on “Nevada – The Silver State”